With the intervention of COVID-19 and the introduction of the University of Suffolk Block and Blend pedagogy, it is important to understand the advantages that research has found in creating and developing learning communities. We need to move away from thinking of learning communities only existing in a physical face to face environment.  Learning communities can be thought of having four boundaries, and we need to think of these boundaries being porous, allowing cross fertilisation of thoughts, ideas and spaces.  Thinking of how and where you can create these boundaries in your courses and modules, will allow you to think of what spaces and places can support this.

Thinking of Block and Blend and the hyflex learning sessions, Brightspace becomes the conduit for the learning communities, where that is tools within Brightspace or the use of the Virtual Classroom tool to promote the use of audience response platforms such as Sli.do. 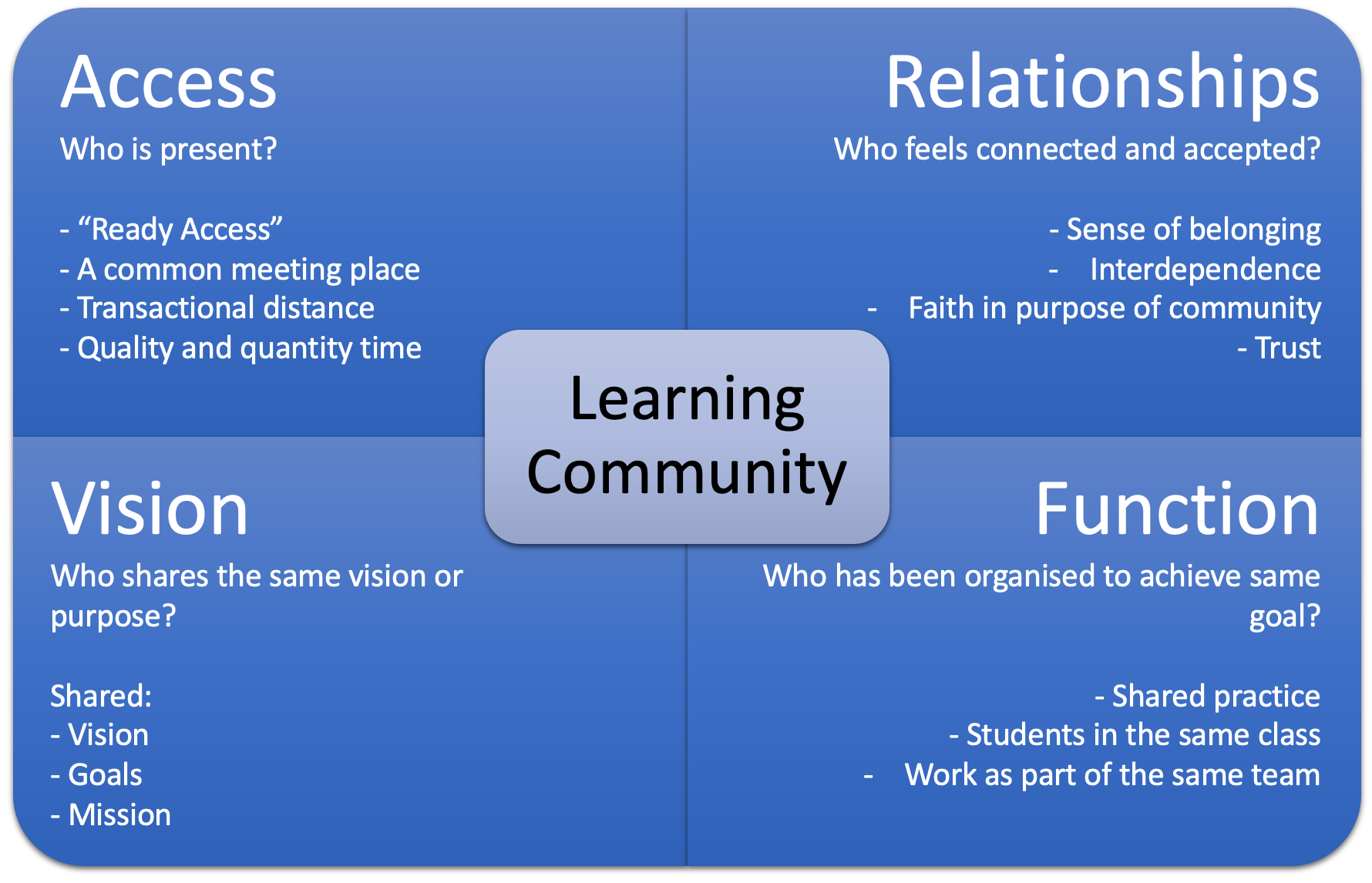 Figure 1. The defining characteristics of learning communities, representing different ways of defining the boundaries of a community

This perception about spatial/geographic communities is common in community psychology research, but also emerges in education when scholars refer to the “classroom community” as simply a synonym for the group of students sitting together. Often this concept is paired with the idea of a cohort, or students entering programs of professional or educational organizations who form a community because they share the same starting time and the same location as their peers.

However, because of modern educational technologies, the meaning of being “present” or having access to one another in a community is blurred, and other researchers are expanding the concept of what it means to be “present” in a community to include virtual rather than physical opportunities for access to other community members.

Rovai et al. (2004) summarized general descriptions of what it means to be a community from many different sources (Glynn 1981; McMillan 1996; Royal and Rossi 1996; Sarason 1974) and concluded that members of a learning community need to have “ready access” to each other (Rovai et al. 2004). He argued that access can be attained without physical presence in the same geographic space. Rovai (2002) previously wrote that learning communities need a common meeting place, but indicated that this could be a common virtual meeting place. At this common place, members of the community can hold both social and intellectual interactions, both of which are important for fostering community development. One reason why many virtual educational environments do not become full learning communities is that although the intellectual activity occurs in the learning management system, the social interactions may occur in different spaces and environments, such as Twitter and Facebook—thus outside of the potential community.

The negotiation among researchers about what it means to be accessible in a learning community, including whether these boundaries of access are virtual or physical, is still ongoing. Many researchers are adjusting traditional concepts of community boundaries as being physical in order to accommodate modern virtual communities. However, many scholars and practitioners still continue to discuss communities as being bounded by geographic locations and spaces, such as community college math classrooms (Weissman et al. 2011), preservice teachers’ professional experiences (Cavanagh and Garvey 2012), and music educator PhD cohorts (Shin 2013). More important is the question of how significant physical or virtual access truly is. Researchers agree that community members should have access to each other, but the amount of access and the nature of presence needed to qualify as a community are still undefined.

Being engaged in a learning community often requires more than being present either physically or virtually. Often researchers define learning communities by their relational or emotional boundaries: the emotional ties that bind and unify members of the community (Blanchard et al. 2011). Frequently a learning community is identified by how close or connected the members feel to each other emotionally and whether they feel they can trust, depend on, share knowledge with, rely on, have fun with, and enjoy high quality relationships with each other (Kensler et al. 2009). In this way, affect is an important aspect of determining a learning community. Often administrators or policymakers attempt to force the formation of a community by having the members associate with each other, but the sense of community is not discernible if the members do not build the necessary relational ties. In virtual communities, students may feel present and feel that others are likewise discernibly involved in the community, but still perceive a lack of emotional trust or connection.

In our review of the literature, we found what seem to be common relational characteristics of learning communities: (1) sense of belonging, (2) interdependence or reliance among the members, (3) trust among members, and (4) faith or trust in the shared purpose of the community.

Members of a community need to feel that they belong in the community, which includes feeling like one is similar enough or somehow shares a connection to the others. Sarason (1974) gave an early argument for the psychological needs of a community, which he defined in part as the absence of a feeling of loneliness. Other researchers have agreed that an essential characteristic of learning communities is that students feel “connected” to each other (Baker and Pomerantz 2000) and that a characteristic of ineffective learning communities is that this sense of community is not present (Lichtenstein 2005).

Some researchers have listed trust as a major characteristic of learning communities (Chen et al. 2007; Mayer et al. 1995; Rovai et al. 2004). Booth’s (2012) focus on online learning communities is one example of how trust is instrumental to the emotional strength of the learning group. “Research has established that trust is among the key enablers for knowledge sharing in online communities” (Booth 2012, p. 5). Related to trust is the feeling of being respected and valued within a community, which is often described as essential to a successful learning community (Lichtenstein 2005). Other authors describe this feeling of trust or respect as feeling “safe” within the community (Baker and Pomerantz 2000). For example, negative or ineffective learning communities have been characterized by conflicts or instructors who were “detached or critical of students and unable or unwilling to help them” (Lichtenstein 2005, p. 348).

Part of belonging to a community is believing in the community as a whole—that the community should exist and will be sufficient to meet the members’ individual needs. McMillan and Chavis (1986) felt that it was important that there be “a shared faith that members’ needs will be met through their commitment to be together” (p. 9). Rovai et al. (2004) agreed by saying that members “possess a shared faith that their educational needs will be met through their commitment to the shared goals and values of other students at the school” (p. 267).

Communities defined by shared vision or sense of purpose are not as frequently discussed as boundaries based on relationships, but ways members of a community think about their group are important. Rather than feeling like a member of a community—with a sense of belonging, shared faith, trust, and interdependence—people can define community by thinking they are a community. They conceptualize the same vision for what the community is about, share the same mission statements and goals, and believe they are progressing as a community towards the same end. In short, in terms many researchers use, they have a shared purpose based on concepts that define the boundaries of the community. Sharing a purpose is slightly different from the affective concept of sharing faith in the existence of the community and its ability to meet members’ needs. Community members may conceptualize a vision for their community and yet not have any faith that the community is useful (e.g., a member of a math community who hates math). Members may also disagree on whether the community is capable of reaching the goal even though they may agree on what the goal is (“my well intentioned study group is dysfunctional”). Thus conceptual boundaries of a community of learners are distinct from relational ties; they simply define ways members perceive the community’s vision. Occasionally the shared conception is the most salient or distinguishing characteristic of a particular learning community.

Schrum et al. (2005) summarized this characteristic of learning communities by saying that a community is “individuals who share common purposes related to education” (p. 282). Royal and Rossi (1996) also described effective learning communities as rich environments for teamwork among those with a common vision for the future of their school and a common sense of purpose.

Perhaps the most basic way to define the boundaries of a learning community is by what the members do. For example, a community of practice in a business would include business participants engaged in that work. This type of definition is often used in education which considers students members of communities simply because they are doing the same assignments: Participants’ associations are merely functional, and like work of research teams organized to achieve a particular goal, they hold together as long as the work is held in common. When the project is completed, these communities often disappear unless ties related to relationships, conceptions, or physical or virtual presence [access] continue to bind the members together.

The difference between functional boundaries and conceptual boundaries [boundaries of function and boundaries of vision or purpose] may be difficult to discern. These boundaries are often present simultaneously, but a functional community can exist in which the members work on similar projects but do not share the same vision or mental focus about the community’s purpose. Conversely, a group of people can have a shared vision and goals but be unable to actually work together towards this end (for example, if they are assigned to different work teams). Members of a functional community may work together without the emotional connections of a relational community, and members who are present in a community may occupy the same physical or virtual spaces but without working together on the same projects. For example, in co-working spaces, such as Open Gov Hub in Washington D.C., different companies share an open working space, creating in a physical sense a very real community, but members of these separate companies would not be considered a community according to functional boundaries. Thus all the proposed community boundaries sometimes overlap but often represent distinctive features.

The importance of functional cohesion in a learning community is one reason why freshman learning communities at universities usually place cohorts of students in the same classes so they are working on the same projects. Considering work settings, Hakkarainen et al. (2004) argued that the new information age in our society requires workers to be capable of quickly forming collaborative teams (or networked communities of expertise) to achieve a particular functional purpose and then be able to disband when the project is over and form new teams. They argued that these networked communities are increasingly necessary to accomplish work in the 21st Century.

Relying on functional boundaries to define a learning community is particularly useful with online communities. A distributed and asynchronously meeting group can still work on the same project and perhaps feel a shared purpose along with a shared functional assignment, sometimes despite not sharing much online social presence or interpersonal attachment.

To talk through how the Learning Design team can support you with building learning communities and what tools can support your learning design, check out what is available on the learning tools landscape page.