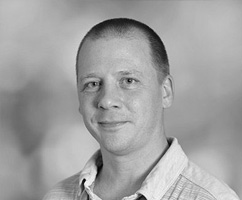 I started working for the University of Suffolk in 2008 in the estates department and was very fortunate to be offered a position in Learning Services in 2015. I initially joined the team in a Faculty Liaison role, assisting the Librarians by working on such things as reading lists and book ordering. As part of this role I also worked on the library helpdesk, as I still do. I joined the Digital Learning Team within the library when it was formed, and I currently manage our audio/visual provision and the reprographics provision for the university.

I handle a wide range of audio/visual requests; lecture capture, student presentations for second marking, conference recording, audio and video content for courses, and talking heads videos. It’s nice to meet students and lecturers as I go about my work. I have been able to learn and develop my editing skills. The editing and processing of videos can take a long time, especially when there are pictures to insert and separate audio and video tracks to combine.

I’ve made videos which have been shown at conferences, and also ones which form module content. Sometimes I’m asked to convert formats, such as making a PowerPoint presentation into a video. Most of the filming takes place around the campus, but I’ve also gone out on location to film. I’ve had to learn a lot of new skills for this role; Google, Lynda.com, and YouTube have proved to be invaluable teachers!

In reprographics I handle the printing of such items as course handbooks, validation documents, and various ad hoc jobs. I’ve produced hundreds of documents for students, mainly Practice Assessment Documents which are a part of the assessment process. I liaise with an outside contractor when we have large amounts of printing, typically at the start of a new semester.