Mathematics support for students at the University of Suffolk.

SPSS can compare the mean of interval/ratio (scale) data with an hypothesized value or between different groups and determine if there is any significant difference. Under the Analyse->Compare Means menu of SPSS we can carry out t-tests (for comparing a mean against a value or comparing 2 groups) and a one-way ANOVA (for comparing the mean between multiple groups). These tests rely on the assumption that we are sampling from data that is normally distributed.

The following SPSS sav files will be needed:

We have collected a sample of scale data and want to test whether this sample shows a significant difference from a known mean value. Suppose we know from experience that a population has a mean value of M. We collect a sample and compute the mean value of the sample. From this we can test hypotheses that the sample comes from a population with a different mean value.

We are testing from this sample whether the cohort's mean is equal to 3.0 or is less than 3.0. It is a 1-tailed test.

Open the GradePoint.sav file in SPSS (or enter the data from the example yourself).

To run the one-sample t-test on these data go to Analyze->Compare Means->One-Sample T test. 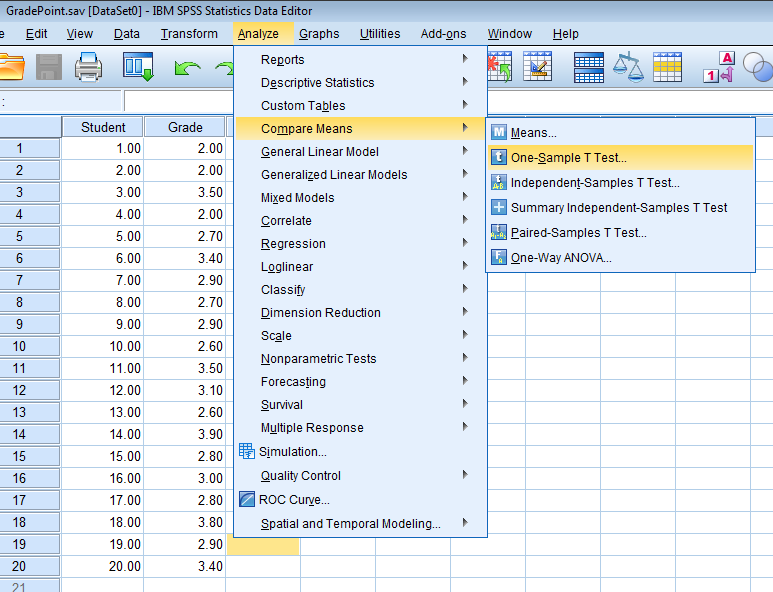 In the resulting dialog box place the grade into the test variable box and set the test value to 3. 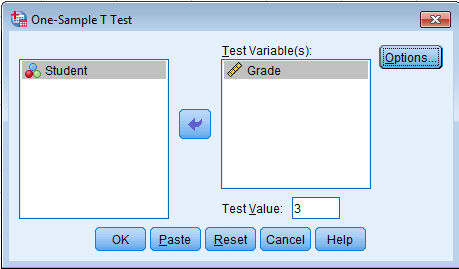 We get output of 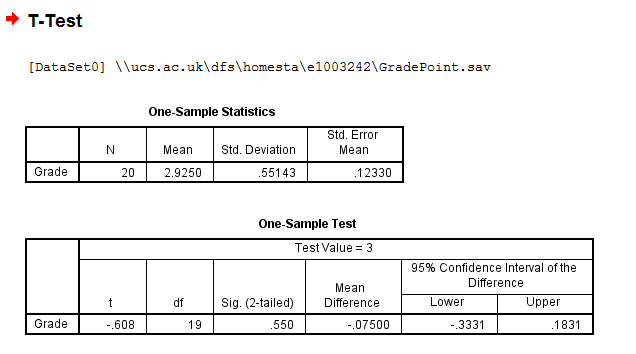 The first box gives us the descriptive statistics of our sample of 20 students. We can see that the mean of the sample was 2.9250. This is lower than 3.0 but we want to test how significant this is. The box also tells us the standard deviation and the standard error of the mean.

The t value (which should be quoted) tells us how many standard errors we are from 3.0 (which we are using as our population mean value). Our value of t = -0.608 tells us that we are below the value of 3.0. The 'df' value (19) is called the degrees of freedom. For a one-sample t test this is calculated as sample size - 1 (20-1=19). The next column is used to find our p-value and therefore decide whether we can reject the null hypothesis (we want this value to be less than 0.05). SPSS reports the significance based on a 2-tailed test. If we were testing whether this group had a different mean grade than 3.0 we would use p=0.550. If, like we are doing, we are running a 1-tailed test we divide this value by 2. So for our test p=0.275. This is the probability that this sample could have been produced if the population had a mean value of 3.0. As p=0.275 (27.5%) is over our required significance of 0.05 (5%) we can not reject the null hypothesis. We therefore do not have enough evidence to reject that the mean grade for this population is lower than 3.0.

The 4 minute youtube video runs through running a one-sample t-test.

Test for a statistically significant difference of the means of an interval/ratio measure between two independent groups.

Scale dependent variable - for which both groups are measured on

The IV is the dominant hand (split by left and right) and the DV is the IQ measurement.

The DV should be interval or ratio data.

Each participant only participates once and is independent from the other participants.

Each group of measures should be approximately normally distributed.

Is there a significant difference between type A and type B respondents scores? 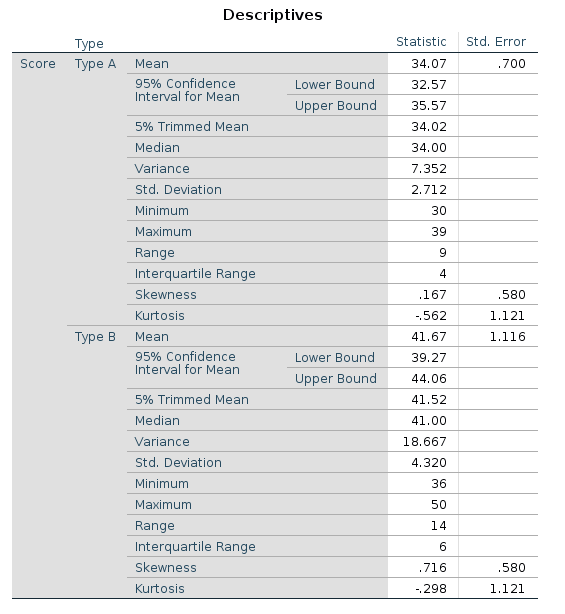 For a normal distribution both Skewness and Kurtosis should be 0. When both written as value +/- 1.96 standard errors they are approximately zero.

Use Shapiro-Wilk as a test for violating the normal distribution assumption. If the Sig. (p-value) is above 0.05 we have not violated this assumption.

For these data we have not violated the assumption of normality.

Checking homogeneity of variance and carrying out t-test

In order to state that there is a significant difference between the groups we would need the significance value of the t-test to be less than 0.05 (which is the usual cut-off point used, known as an alpha value). In this example it is written as 0.000, which means p<0.001. The difference on scores between the two groups is statistically significant.

We have found that the difference is statistically significant, this means that is unlikely to have occurred by chance due to sample chosen. This is a probabilistic measure but we can also quote how big the difference between the two means is. A statistic that measures this difference is known as ‘effect size’. Common effect size statistics are eta squared and Cohen’s d.

are the number of samples in each of the groups

Guidelines, proposed by Cohen are:

An independent samples t test was used to compare the scores between participants described as type A (n=15) and participants described as type B (n=15). A Shapiro-Wilk statistic was computed to check for the normality of the distribution and neither group violated the normality assumption. A Levene’s test was found to be non-significant and so equal variances were assumed. The t test was statistically significant, with type A participants (M = 34.07, SD = 2.71) having scores some 7.6 units (95% CI [4.9, 10.3]) lower than type B participants (M = 41.67, SD = 4.32); t(28) = -5.77, p<0.001, two tailed. The magnitude of the difference between the two groups was very large (eta squared = 0.543).

Do people have a lower BMI after a 10 week program of fitness?

The variables are interval/ratio data.

Each measure should be approximately normally distributed.

The difference between the paired readings should be normally distributed.

Does intervention make a difference to the participants score?

We need to check that the difference between the pairs of scores are also normally distributed.

Use Shapiro-Wilk as a test for violating the normal distribution assumption. If the Sig. (p-value) is above 0.05 we have not violated this assumption.

For these data we have not violated the assumption of normality for any of the measures (including the difference).

Carrying out a paired samples t-test

Put the before and after variables into the Paired Variables box.

The output shows that the mean after intervention has decreased. The mean decrease is 2.5 (with a 95% confidence interval of -0.052 to 5.05). The significance of the test is p=0.054. In order to conclude that the change is significant we need the p value to be less than 0.05 (the commonly used alpha value). We cannot conclude a significant difference in this case, but we can say (as it is close to 0.05) that it is approaching significance.

The magnitude of the difference between the two means (effect size) can be calculated. Common measures of eta squared and Cohen’s d

is the t value in the paired samples test table

is the size of the sample

Guidelines, proposed by Cohen are: